What is a language? 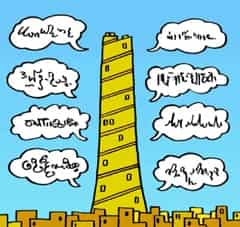 It is a convenient fiction to say there are about 7000 living languages in the world, because this is the number of languages that have been singled out by people who know a lot about these things at the Ethnologue. However, this number elides serious questions. For example, Kirundi, spoken in Burundi, and Kinyarwanda, spoken in neighboring Rwanda, are considered two different languages even though you would need to see a passport, not a dictionary, to know who came from which side of the border. On the other hand, Fula is a blanket term that covers a continuum of varieties, problematically called dialects, 9 of which get their own official ISO 639-3 codes. We could continue at length, but Stephen Anderson already wrote an excellent article on the subject, explaining many important considerations in the notion of "language". We'll quote the most relevant parts, and urge you to read the rest.

The late Max Weinreich used to say that “A language is a dialect with an army and a navy.” He was talking about the status of Yiddish, long considered a “dialect” because it was not identified with any politically significant entity. The distinction is still often implicit in talk about European “languages” vs. African “dialects.” What counts as a language rather than a “mere” dialect typically involves issues of statehood, economics, literary traditions and writing systems, and other trappings of power, authority and culture — with purely linguistic considerations playing a less significant role. For instance, Chinese “dialects” such as Cantonese, Hakka, Shanghainese, etc. are just as different from one another (and from the dominant Mandarin) as Romance languages such as French, Spanish, Italian and Romanian. They are not mutually intelligible, but their status derives from their association with a single nation and a shared writing system, as well as from explicit government policy. In contrast, Hindi and Urdu are essentially the same system (referred to in earlier times as “Hindustani”), but associated with different countries (India and Pakistan), different writing systems, and different religious orientations. Although varieties in use in India and Pakistan by well-educated speakers are somewhat more distinct than the local vernaculars, the differences are still minimal—far less significant than those separating Mandarin from Cantonese, for example. For an extreme example of this phenomenon, consider the language formerly known as Serbo-Croatian, spoken over much of the territory of the former Yugoslavia and generally considered a single language with different local dialects and writing systems. Within this territory, Serbs (who are largely Orthodox) use a Cyrillic alphabet, while Croats (largely Roman Catholic) use the Latin alphabet. Within a period of only a few years after the breakup of Yugoslavia as a political entity, at least three new languages (Serbian, Croatian and Bosnian) had emerged, although the actual linguistic facts had not changed a bit. PDF: How many languages are there in the world? by Stephen R. Anderson