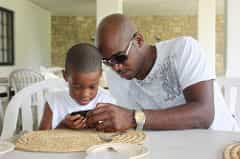 An article called What languages to localize your game into? opens a general window to the situation of languages within technology and many other markets. The take-away message is that companies invest in languages that have a high profit potential. That is a perfectly logical business plan. As a method of choosing languages for developing public knowledge resources, it is a disaster.

The case of electronic 🎮 games demonstrates that 🏭 industry intentionally avoids languages with few resources, both because the profit potential is relatively low, and because there are few current resources to make localization easy. When considering what languages to invest in, game makers are advised to stick with the usual suspects: English always, then some mix of French, Italian, German, and Spanish, and potentially Chinese, Japanese, and Korean. Charts show that several other markets have ROI potential, such as Russian, Dutch, and Portuguese.

Do they have money to spend? There are languages with huge numbers of speakers, such as Chinese or Hindi, but the number of potential players who can afford to buy your game or would spend money for in-game purchases is often low. Do the high numbers make up for the lower value per user?

By this measure, no African language merits industry interest. No Native American language is worthy of attention. Most Asian languages and their markets are too confusing. Even prosperous European languages like Catalan and Estonian do not rank, because the payout is too small.

This bias toward the wealthiest languages is embedded in how governments and organizations such as charitable foundations approach the development of language resources. But think about this for a minute. To address horribly unequal educational outcomes between rich neighborhoods and poor ones, would you spend all your money to expand the rich schools because they had a greater guarantee of success? To open literacy opportunities, would you build a library next to one of the world's great public knowledge centers at 42nd Street and 5th Avenue in New York, or would you seek out an unserved neighborhood in Cuzco or Nairobi? If the objective is financial reward, by all means avoid meager markets and take this advice:

In summary, the mainstream European languages are a safe bet. French, German, Spanish, Portuguese, Italian are the traditional languages to start with. In Asia, China, Japan and Korea are the massive markets, but you need to do more than just translate. Latin America, Southeast Asia, Russia and India are growing fast, but the market sizes and average revenue per user are much smaller. When deciding on languages, remember to take not only the translation cost, but also all collateral expenses into consideration.

If you wish to invest in the human potential that is hidden behind language barriers, however, we will put your donations to good work right away.